OK, so it’s been a while since I’ve posted on this blog – the main reason being that a change of job required me to move away from my cave a couple of years ago. The plan is to move back to the cave location at the end of this year and the build will continue where I left off.

One project however which has been going full steam ahead has been the development of the Kit Car that I featured in an earlier post. In short, that particular car has all but been thrown away, but what has been born in its place is a much bigger, much shinier (and exponentially more expensive) man cave project – I’ve started my own car company!

How has that come about? I hear you ask. Well, here’s the past year of the project distilled into a few minutes.

For a start, let’s have another look at the original Kit Car that I initially planned to restore. 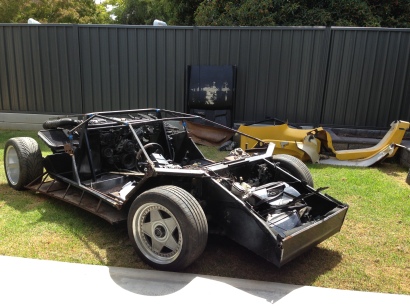 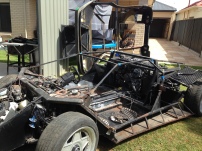 As can be seen from the photos, the build quality was not fantastic, and I quickly realised that the restoration was well beyond my own capabilities – a man needs to know his limitations!

Not being one to give up on a project, I sourced a man with the right skills to restore my car and resigned myself to paying a premium to get it back on the road. The car was loaded onto a truck and sent two states away to the workshop where it would be restored to its former glory. It arrived at the shop and I was excited!

After a quick tear down and inspection by the engineer on the job, he quickly decided that the space frame of the car was a deathtrap, the suspension was too primitive for what we wanted, it was drastically underpowered, and a few of the body dimensions were non-compliant with current road regulations for registration. The project was looking like a throw away item, but after a bit more spitballing we decided to plough on with a new space frame and a few body mods to restore the car.

First things first – a new space frame, incorporating some new suspension mounts to take Corvette C5 suspension, and an engine bay designed for a Mercedes AMG 5.5L V8 to give the car a bit more grunt.

Next problem – a quick review of the dimensions of the average Supercar revealed that our chassis was about 1.5 metres too short for its width, which would have significant handling implications. No problem – we’ll stretch it! This of course meant further body modifications, but we were already having to change that anyway.

Phase one of the new space frame done.

Turning our attention to the bodywork, the rear of the old Kit Car had the lights too far in from the widest point for it to be road legal. No problem, let’s design a new rear panel for the car and push the lights further out. Beer always helps the creative process! 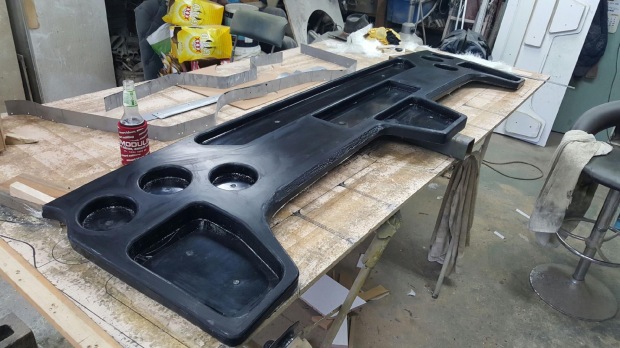 Hang on a second….  that rear panel will never fit the back end of the car now – perhaps some modifications there as well?

At about this point it occurred to me that we were creating a whole new car that would bear little to no resemblance to the original. It also occurred to me that to make a single car we would need to do all the research and development, and create all the moulds for the panels, and that to then make further cars for a potential production run would not be that much extra cost or effort. The lightbulb in my mind pinged on and my car company Delta Automotive Industries was born!

Now comes the hard part – building a prototype car that will not only work and pass roadworthy to be street legal, but will be reproducible and marketable to sell and make the company a success.

Mechanically the space frame build needed to first develop into a rolling chassis stage to then get the car over to the fibreglass shop for the prototype bodywork to be fitted. Below the Corvette C5 suspension and a shiny new set of Bilstein shocks have been fitted.

Meanwhile, the rear bodywork was under development with the goal of creating an eye-catching and somewhat outrageous design for the car! 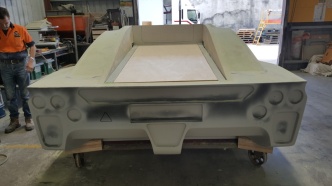 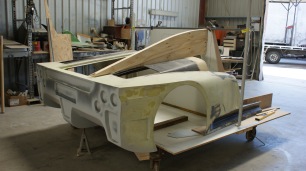 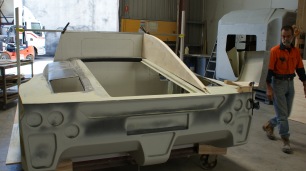 Once the rear bodywork plug was reaching its final shape, it was time to sink some hours into getting it perfectly smooth and symmetrical. 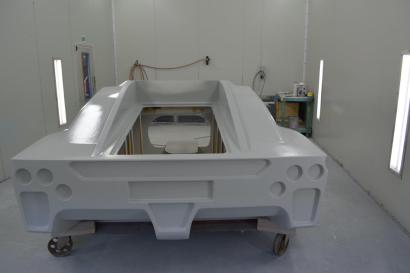 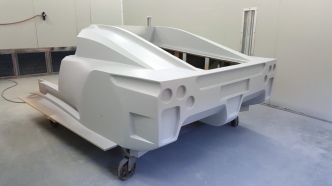 Once perfected, it was hit with a smooth coat of two-pack paint – in Mack Truck Brown! Meanwhile a set of Lamborghini Aventador wheels had been sourced and fitted to provide shoes for the prototype. In the below images, a mid-clip from an AMG Mercedes had been trialled as a solution for the cabin for the project – this concept was later abandoned. 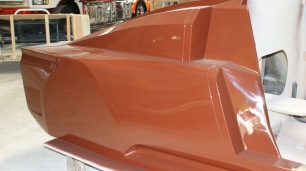 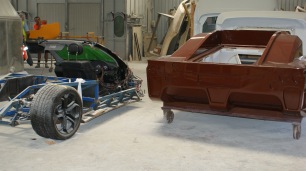 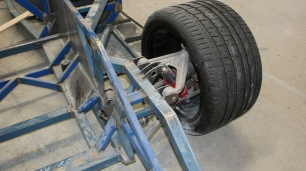 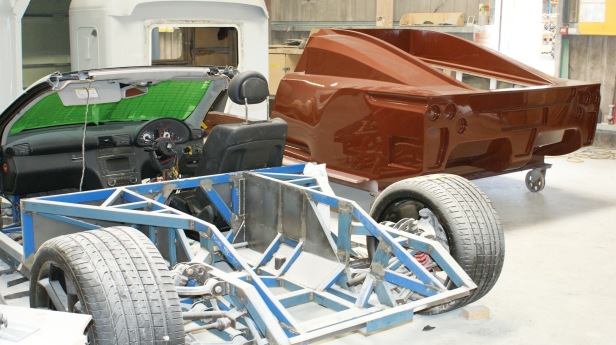 The rear plug was then ready to have a mould made out of it for the production of the first set of body panels. The process looked a little like this…

A high speed time-lapse video of the rear body mould creation can be found linked here at Delta’s Youtube site.

With the moulds created, the first rear body panels were laid up in them. 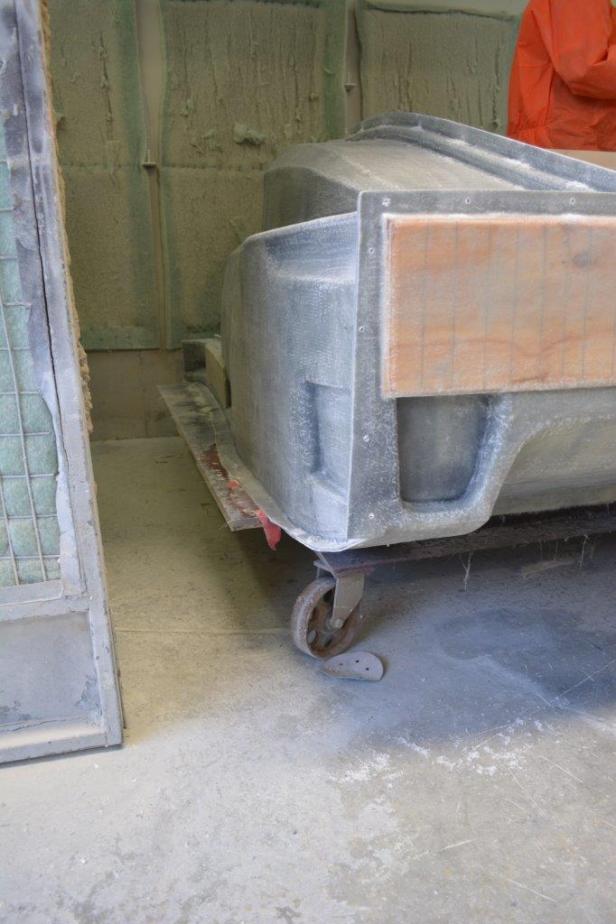 And then like a butterfly emerging from a cocoon came the first rear panels for the Delta prototype.

Of course every car needs badges, and we had these done up for the Delta, with the prototype dubbed the “Ligero” 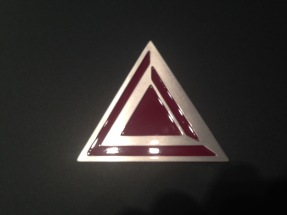 Next came the test fitting of the rear panels, and commencement of the fine tuning of all the other components to get the prototype on the road. 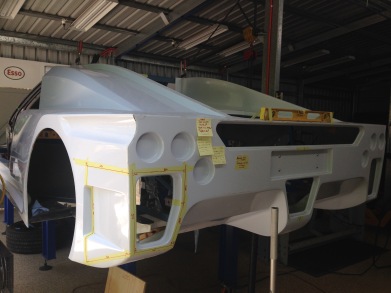 Most recently has been the fitting of rear radiators, and the rear wheel arches and ducting for the engine. 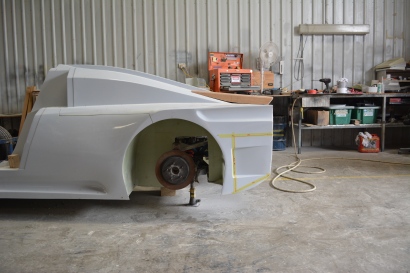 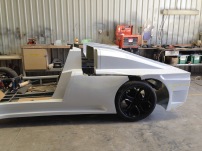 Here’s me as the proud father in early June.

This has been a bit of a whirlwind catchup of what the Kit Car project has morphed into. It is now a full blown entrepreneurial startup venture, with a view to offering the finished cars for sale in the future, either as kits for buyers to assemble and complete themselves, or as turn-key cars. I’ll keep updates posted on this site, but for anyone interested the complete story, including a detailed build blog and hundreds more photos and videos can be found through Delta’s website (follow the link to the blog), and FaceBook, Youtube, and Instagram page, all linked below.

Thanks for looking. Cheers, dan.