Here’s a cautionary tale from a man cave project that didn’t go quite to plan. I feel it’s important for a man to know his limitations, however the hard part is how do you know them unless you test them? It turns out that panel beating and spray painting are limitations of mine.

This story took place a few years ago, and starts a week after I returned from my second tour of Afghanistan. A few days after getting home I decided that I absolutely had to cut a small amount of rust out of my vintage Lamborghini Urraco. Not content with just that, I decided that I would do a complete colour change from red to black. Here’s what the car looked like before I took to it.

Certainly not disastrous, but as I said, my mind was made up, it needed to be black. For the entire six weeks of my post-deployment leave, I pulled the thing apart and sanded, sprayed, and sanded some more. Being a complete colour change meant that I had to pull every panel off the car and paint the inside of them as well. Naturally my wife, having not seen me for six months whilst I was away, was wrapped with the idea of me spending every day dawn to dusk working on my car in my old cave!

Everything was going to plan in the early stages, with the primer and first couple of coats of black going on nicely. 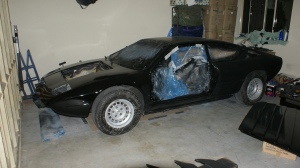 After getting three coats of colour on, I decided that a couple of coats of clear would really bring out the shine in the black. That was when it all went wrong. Despite using the same brand of paint in the clear, and the exact same thinners, the clear coat reacted with the black and began to form small bubbles almost immediately. As you can probably imagine, I was suitably disappointed about the outcome, but if nothing else, it provided an excellent source of amusement for my army buddies. The end result is an old Lambo that looks as though it is suffering from a mild case of smallpox. 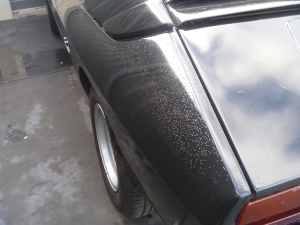 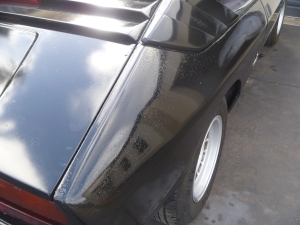 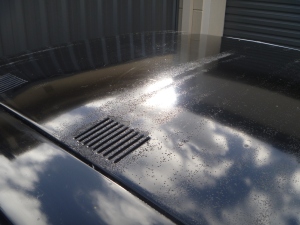 I feel that it is important to share this failure for two reasons, firstly it is part of my healing process, and secondly as a caution to fellow man cavers who may be contemplating such an undertaking!

Although the Lambo is a poor outcome, it pales in comparison to the shocker that a colleague of mine had shortly after he returned from one of his trips to Afghanistan. Within a couple of weeks of returning, he had decided to sell his classic yank tank (an Impala), and buy a Hyundai Excel! At very least, I didn’t make a mistake of that magnitude.

All going to plan, I’ll get the Lambo off to a panel beater later in the year and have it sorted out professionally. I’ll post photos when I do.