For the centre section of my bar top, my plan is not to have any coins inlayed in it, but to have a single feature being a large brass “K” inlay. “Kilo” was relevant to me in my previous job with the army, and this particular brass letter was attached to the door of the original Blue Voodoo Lounge in Afghanistan.

I’d had the brass K sitting on the wood for a while and it left a neat outline on the bar top to serve as a guide. After carefully centring the K, I traced around it and then drew a series of lines parallel to the straight edges of the letter. I’d worked out that with a router attachment fitted to my Dremel, the distance from the edge of the fitting to the cutting bit was 28mm. I drew the parallel lines at that distance from the edges of the letter to allow me to clamp a straight edge to the wood to serve as a gate to run the Dremel along. 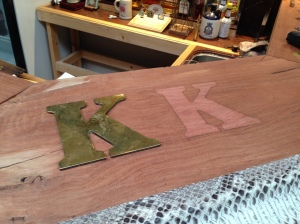 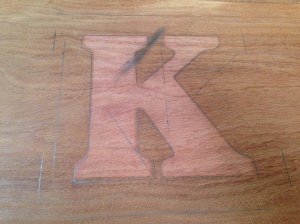 The straight edge I used was simply a plastic ruler, clamped as seen in the first image, and then moved around to etch out the initial edges of the inlay. Once the straight edges were complete, I free-handed the small curves and used the router attachment to etch out the fiddly bits on the top and bottom of the letter. 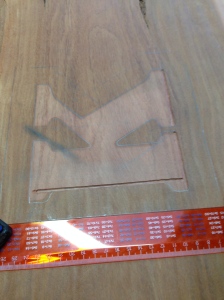 Using the Dremel was a little time consuming, so to remove the bulk of the inlay in the centre parts of the letter I used the same type of Forstner drill bits that I used to inlay the coins in the other parts of the bar top.

Once I had the correct shape etched in, it was a matter of slowly working my way down to the required depth for the inlay to sit flush. I did this by gradually increasing the depth of the Dremel bit around the edges, and then using a combination of gently drilling and chiseling out the centres of the letter. 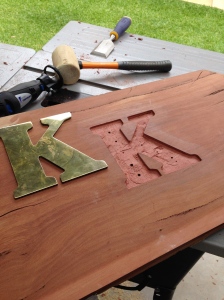 After about 6 hours of work I finally had the K inlayed flush. I didn’t get all my edges perfect, and one parallel line on the inside of the bottom of the letter was about 2mm off, leaving an irregular gap, but overall I think it will look good once I put the lacquer over the top. Now that I have a bit of confidence up with the Dremel, it’s time to turn my attention to inlaying the smaller, irregular coins and badges into the bar top. 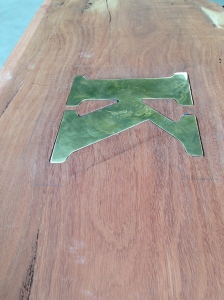